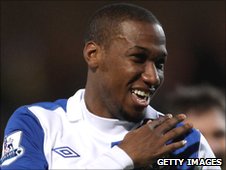 Blackburn manager Steve Kean says he wants Junior Hoilett to stay at Ewood Park, but will not enter into contract negotiations until the summer.

Kean is well aware that the Canadian striker’s good form could attract the attention of other clubs.

Hoilett has scored four goals in his past nine games despite Blackburn’s recent poor run.

The 20-year-old has a contract with the Lancashire club which expires at the end of next season.

Speaking to the Lancashire Telegraph, Kean said: “I hope other clubs don’t start looking at Junior but I wouldn’t be surprised because he is certainly a match winner.

“As a full-back, seeing him run at you and get at you in the box, you should be petrified because he can move that ball and do anything with it.”

The Scotsman is wary of raising the issue of contract talks for fear of disrupting Hoilett’s impressive form.

“What we don’t want to do is get into contract negotiations now and take away from that type of performance,” he said.

“Sometimes that can give him something else to think about that is not required.”

Hoilett played a crucial role in the 2-2 draw with Blackpool at the weekend, equalising deep into stoppage time, and Kean hopes the youngster can continue to contribute important goals.

“Let’s just keep him playing like that. Come the end of the season we can sit him down and hopefully sort out a long-term deal for him,” Kean added.